Ever had the feeling that VIPER should be simpler?

Architecture is whatever facilitates change: adding features and fixing bugs. It includes any work done during the lifecycle of the code: type, test, document, understand, debug, modify.

Your work as a programmer is writing the code and structuring the resulting complexity to provide a high-level view. That is, you create the engine pieces, then hide the engine under the hood, exposing just the accelerator pedal. Correctly done, this divides the application into layers of abstraction separated by well-defined interfaces. Low-level details can be ignored, while high-level components are ready to be re-composed in different configurations.

As long as arrows point one way only, there will be no screw-ups like the network client telling the router to navigate to the login screen. For why this would be bad, see points one and two above.

The view is a particular case because it displays data and accepts user input. Because of this, view and presenter need bidirectional communication. But at least, they don’t need to depend on each other. They can rely on protocols:

Or one element may offer a closure that the other can set to receive events.

I would replace the router with a coordinator to centralize navigation code and avoid coupling to other screens. Eventually, you may want to launch screens in isolation to iterate UI edits faster.

As for models, you often have three for isolation: entity, domain, view model, with mapping between them. There are other choices of implementation.

In summary, Viper has an SRP (single responsibility principle) architecture, a discussion of the responsibilities involved, and the novelty of saying: every screen should have these elements because you’ll probably need them.

Any architectural style is rooted in basic design principles (SOLID, GRASP, etc.) and provides consistency. But design doesn’t end with the broad strokes of a particular style. You can do let’s say, Viper, and still mess up. Let’s see an example.

Problem. A common anti-pattern is to update individual view elements from multiple points. This is prone to errors and hard to debug because it defines your view as a function of a sequence of events, leading to race conditions.

Discussion: What design principles can we use to fix it?

Solution. So with all this in mind, the solution is to update the view through a single point, with a single object: view.update(model) –or bindings if you prefer. Now the view is a function of the state.

Takeaway point: you need design principles. They are the pillars of architecture and operate within its boundaries. Without them, we lack criteria and misuse architecture. Passively following an architecture style is not by itself architecture.

Next, we’ll revisit Apple’s MVC with an active attitude.

Apple didn’t design key elements of the iOS architecture for complex apps. This is fine. It keeps things simple for the common case and it’s straightforward to fix. I’ll give you two examples.

Writing a complex app that uses most of the app delegate will grow the delegate to thousands of lines. If that’s the case, the workaround is easy. 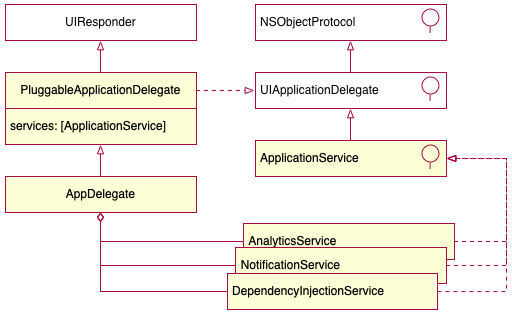 UIViewController has ten responsibilities out of the box, but they are either lifecycle calls or display preferences, so they are pretty much views.

Writing a 2000-line class to observe, download, persist and transform data blatantly breaks the single responsibility principle. It’s our job to recognize and fix this, not Apple’s.

Most software written is an ad hoc solution with the minimum number of elements needed. It doesn’t follow any named style. However, this requires making choices. If a team says things like “with Viper we don’t have to think”, or “let’s all do things the same way”, it means they are not comfortable with ad-hoc design and need a template architecture like Viper.

Viper is easy: disregarding the problem, use the same elements, don’t design anything. Here are these boxes, put your code in one of them. This is fine, use Viper if you have to.

To walk my own path I need intuition. Intuition is an instant gut feeling produced by the mind quickly shifting through experience and knowledge. Intuition is built from experience, reflecting at high and low level, learning principles, and experimenting. Intuition provides a quick answer in the face of unquantifiable outcomes.

But in the meantime, I’ll make mistakes, and work will slow down and become complex and frustrating. I won’t notice, or maybe I’ll blame it on something else that doesn’t hurt my ego. It’s hard to recognize the mess because errors don’t slap you in the face, they kill you by a thousand cuts.

Unfortunately, there are no shortcuts, you have to respect the process. Otherwise school would be over in a day. Wouldn’t that be something?

Kids, I have decades of experience being an adult and I’m quite articulate. I’ll explain growing up and today you’ll go back home as adults.

Viper constrains your environment to a coding standard:

The goal of OOP is to decompose a problem in entities of the domain. For instance, in a design for a parking lot there are objects like ParkingTicket, TicketScanner, etc. Nowhere in the domain there is something called interactor. What does interactor even mean?

Because mobile applications are often glorified tables and entry forms, Viper takes a one-size-fits-all approach to design. It tells you to place your code in one of five boxes: view, presenter, interactor, router, entity. No thinking is needed, just choose a box.

Does it work? Often, it does. You probably need those five roles per screen, and the problem may be small enough not to require specialized objects.

But sometimes it doesn’t. Programming is a wicked problem where each feature is different and needs a specific solution. Eventually, you’ll get:

A symptom of low cohesion is the developer having to debug its way through the app because entities at the same level of abstraction are artificially spread. You no longer understand elements on its own, because part of them is elsewhere.

There are five Viper objects in most Viper implementations, plus a protocol per component —each element in a folder, plus additional elements: builder, view model, mapper.

On top of that, a design system needs a screen composed of modular elements. If you make each a Viper module, the number of files will leave you thinking there must be a better way.

The book “App Architecture” had this to say about Viper, a “misguided” [sic] pattern they didn’t cover:

Attempts to bring “Clean Architecture” to Cocoa usually claim to manage “massive view controllers,” but ironically, they do so by making the codebase even larger. While interface decomposition is a useful approach for managing code size, we feel it should be performed as needed, rather than methodically and per view controller. Decomposition should be performed along with knowledge of the data and tasks involved so that the best abstraction-and hence the best reduction in complexity-can be achieved.

Before that, Kent Beck defined simple design in 1990:

This controller has 200 lines (4,5 screens). Can you describe what’s going on?

Viper is a uniform way to achieve single resposibility and testing. Unfortunately, it also dilutes the programmer’s intention because it taxes the reader’s working memory with lots of abstractions and indirections. Good ingredients, mediocre stew.

If you are already doing Viper, consider some tweaks: Why are you writing a different protocol per component?

Why are you using protocols at all?

Bloated architectures like Viper are a technical solution to a social problem: we don’t trust people to design correctly, and we don’t know how to teach them. So instead, we rely on a mediocre solution. In time, people end up thinking that’s what professionals do.

Men almost always walk in paths beaten by others and act by imitation. –Niccolò Machiavelli

We do it because it saves a lot of energy. But it should only be a crutch on our way to free thinking. If you love Viper, try not to use it and see what happens. Every mistake has something to teach you.